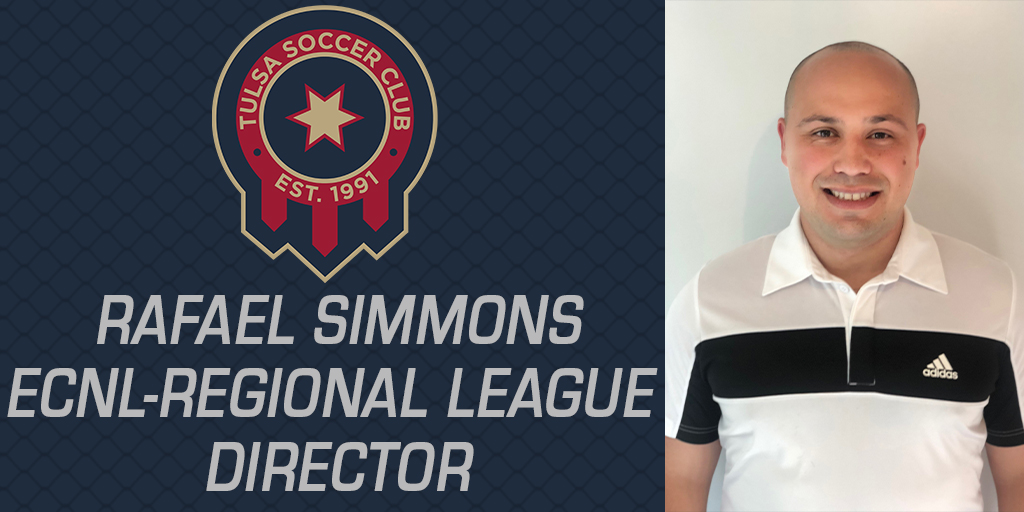 Prior to Neosho, Coach Simmons served as the assistant Coach for Ozarks FC in the (NPSL), as an assistant Coach at Dakota Wesleyan University, and as Head Coach at Dakota Alliance Soccer Club, where he helped guide youth players through the college recruiting process. While at Dakota Alliance, Coach Simmons also served as Head Coach for the South Dakota Olympic Development Program (ODP).

We welcome Coach Simmons, his wife Sarah, and their two sets of twins, Mikael and Mylah who are 3 years old, and Avery and Annika who recently turned 1 to Tulsa Soccer Club.

Girls Director of Coaching Yolanda Thomas on Coach Simmons:
“Coach Rafa stood out tremendously in the hiring process. His knowledge of the game, dedication to developing players on and off the field, and his long track record of preparing players for their next step will provide leadership within the ECNL-RL program that will ensure our players get the best possible experience and resources to achieve their dreams.”

Mike Saddler, Athletic Director Colby Community College on Coach Simmons:
“I hired Rafa at Neosho and if I had an open position, he would be my first call. He is extremely organized and took on the pressure of leading of two programs while raising preemie twins without breaking a sweat. Rafa has a remarkable ability to relate to kids, his players respect him, and under his leadership they want to perform on and off the field.”

Julio Vasquez, Columbus Crew MLS, Team Coordinator
“Rafa is a great and genuine person. He is a life-long learner and student of the game who is always looking for ways to improve. He sets high expectations in training but shows immense patience when working with players. His voice is distinct. When he speaks, players listen.”