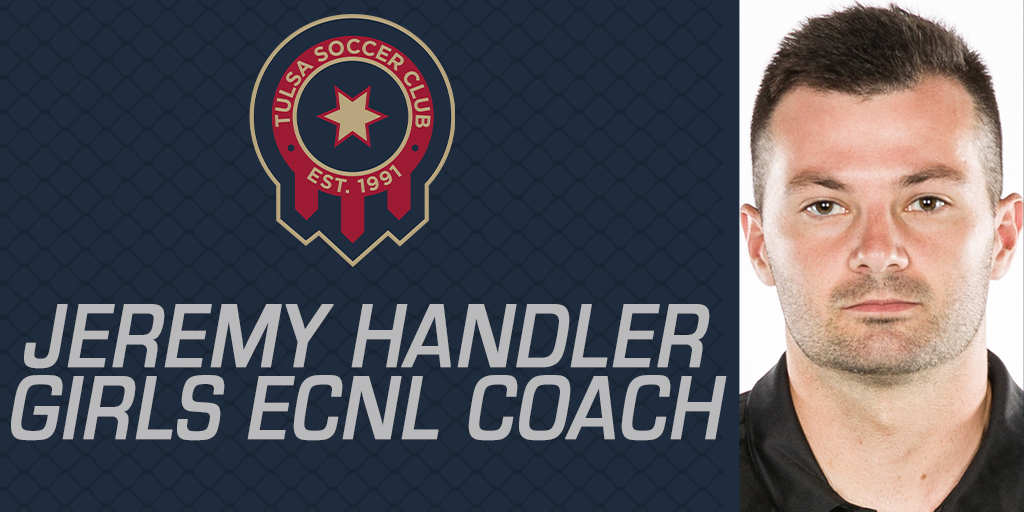 Coach Jeremy Handler joins Tulsa SC after a stint at Salvo SC in the USSF Girls Development Academy. There he helped build a first year Development Academy program in the U17 and U19 age groups. During his time at Salvo, Coach Handler was responsible for all team training, scouting and recruiting potential DA players, video analysis, team budgets and logistics. He developed individual player development plans and facilitated the college recruiting process and guided many players to the college ranks. Coach Handler was also responsible for ensuring compliance with USSF Development Academy Club Standards. While at Salvo, he also coached against Tulsa SC ECNL Director Yolanda Thomas in the WPSL Regional Semifinal in 2019.

Prior to Salvo, Coach Handler spent time with Minnesota United FC, an MLS franchise, working as the first assistant coach for the Boys Development Academy U13 and U14 teams as well as with the Pre-Academy U11 and U12 age groups. While at Minnesota United FC, he was responsible for team training, coaching matches, internal and external scouting and video analysis. He was also in charge of tracking physical periodization for the U14 boys through use of performance technology.

Handler coached within the strong Minnesota Olympic Development Program where he lead teams to two regional championships and national runner up finishes. He also head coached the 2002 boys ODP team on a trip to Germany. In addition, Coach Handler has experience coaching the women’s college game from Hamline University in St. Paul, Minnesota, where he assisted in all aspects of the program. He also has experience in the men’s college game- at Augsburg University he served as a graduate assistant and recruiting coordinator in a program that produced All-Conference, All-Region, and All-American players .

Coach Handler also served as the Director of Coaching at Cottage Grove United Soccer Club where he oversaw all aspects of soccer operations and managed all staff coaches. While there he was the head Coach for the Girls U17 & U18 teams. Coach Handler also has experience as a U23 team Head Coach and first team Assistant Coach with Minneapolis City SC in the NPSL.

Yolanda Thomas, Director of Coaching on Jeremy Handler
“Jeremy set himself apart in the hiring process. He brings experience from a professional youth academy, the college game, ODP, and as a proven leader and winning coach. He has a great educational background and is not afraid of a challenge. He has long term goals for his teams that he works towards steadily. He submitted an impressive body of work during the hiring process. Jeremy’s ability to teach the game and his leadership style will help our players improve for years to come. I’m really excited for the 06 & 08 age groups who will be directly impacted by Coach Jeremy upon his arrival.”

Emily Cripe, Head Coach Hamline University on Jeremy Handler
“Jeremy was a fantastic assistant coach. He’s a professional through and through and relates incredibly well to the girls. His players know he cares deeply about them and they perform better because of it. He has a very calm presence – it helps players maintain focus without getting anxious. He’s also a dedicated student of the game with a great ability to make it simple to his players. Most importantly, his former players, whether in club or college, all speak very highly of him. He truly makes an impact on people.”